What we call "the world"...is not given as self-evident from the outset. It is apprehended... in an ongoing "crisis" of spacial consciousness.
- Ernst Cassirer

The HIV-1 M virus is the express cause of the Acquired Immuno-Deficiency Syndrome (AIDS) which affects over 36 million people world-wide. The virus has now been identified, characterized, and traced to its origins in the forests of southeastern Cameroon. In that remote location, recent research has found chemical evidence dating the origin back to the early 1900s when the local chimpanzee carried a nearly identical virus called SIVcpzPitt. In that habitat, a certain amount of slain animal blood would constitute the point of infectious crossover when direct contact occurred with any wounds on the feet or hands of a human hunter. Other exposures likely occurred earlier but the viruses had not yet formed the rare mutations necessary for human adaptation, or the infected humans had not mixed or migrated from this isolated region. However the key forces that caused the spread of the virus in the twentieth century lay in the clearing of paths for porters, railroads, and canoes. The stimulus was colonial traffic in raw rubber, conveyed by forced labor from deep forest to the Congo urban sprawl. From there, the hidden viral passenger met further acceleration in the emerging social, economic, and indeed medical networks of the modern world.
As a retrospect, Afriterra now provides a geographic companion to this story. Here we present a lucid display of the rare 1895 Hansen map with over 70 notations from this early pivotal time. In high-definition, the map reveals deeper details of the land, rivers, and place-names that constitute this human encounter with the forces of nature. On our digital-zoom platform one can trace the arrival of this disease backwards from the earliest case location in Brazzaville/Kinshasa on the Congo River, where the course flowed down from Mossaka at the northerly junction of the Sangha River. Even further back, gaze upstream to Quesso at the northerly junction of the Ngoko River, and up to Moloundou at the Bomba River and the Lobeke forests where this origin took place near the very center of the map. Run your own search here to feel the connections through time and space; and tell all of us about your experience and insight. 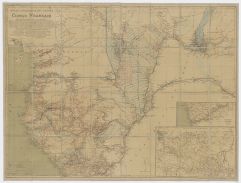 One thought on “Pathways from Cameroon: A Glimpse at the Origin of AIDS”